4 reasons YOU’RE not setting goals, and how to set and crush them this coming year! 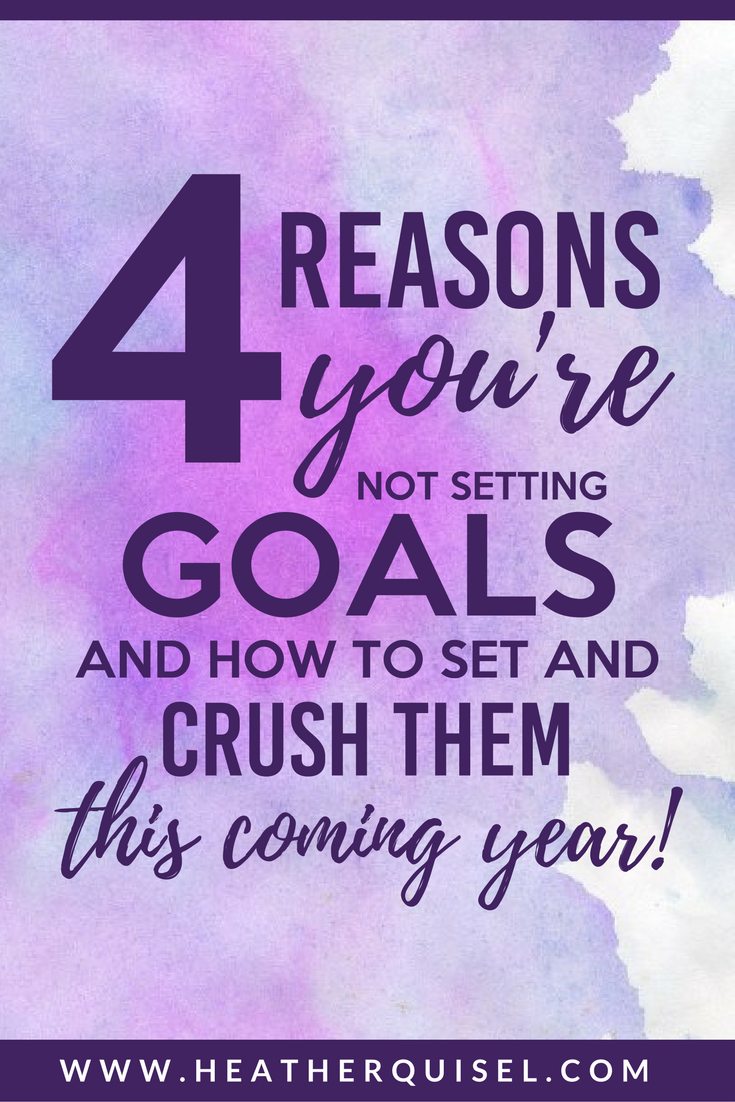 What do you think about when I say the word GOALS?

Does the idea of setting goals for the new year get you excited or are you about ready to check out of this conversation altogether?

For many people, goal setting is frustrating – and often meaningless.

Why is this? There are 4 main reasons people don’t set goals:

If the people you spend the most time with— family, friends, colleagues, etc. — aren’t setting clear and committed goals, chances are you won’t be, either.

We’re greatly influenced by the people we’re surrounded by. As you begin to look ahead to the new year and set goals for yourself and your business, it’s important you share them with people who understand it. Surround yourself with people who set goals and work towards achieving them.

Bob Proctor says if you set a goal you know you can achieve, it’s not a goal; it’s an item on your to-do list. The other struggle people have is they don’t know how to set a goal that’s clear, written, specific, and measurable. Countless times clients have told me their goal for the week is to “make as many phone calls as possible.” What does that MEAN, anyway? How many is that? How will you know when you’ve reached that goal? How will you know when you’ve become successful at your target?

When setting a goal for the coming year, it’s not important that you know HOW to reach the goal. You shouldn’t know how (yet). What’s important is that you set a goal that you can grow INTO over the course of the year. You’ll figure it out. I’m confident, but you must first set it and reach for it.

Failure hurts, but it’s the necessary key to success. There’s no such thing as a successful person who never failed!

Everyone feels fear, but you get to choose if that fear will paralyze you or propel you forward. One of our favorite team mottos is #doitscared

People are often concerned that if they’re unsuccessful at achieving a goal, others will be critical of them.

Let me tell you this: if you ARE successful at achieving that goal, people will be critical of you! There will be people who have an opinion of you no matter what you do and it really doesn’t matter. If you set a goal and don’t achieve it at first just keep moving towards it. I can tell you that I have NEVER hit a goal I’ve set in the timeframe I’ve allotted. Never. But I’ve always grown beyond where I would have been had I never set the goal in the first place! And that’s really the point, isn’t it?

Get comfortable setting that big goal. Settle into moving toward it daily. Never let the opinions of others veer you off track, especially if those people have no goals themselves.

There you have it: four reasons most people don’t set goals. What has held you back in the past? Do you have goals for the coming year? I’d love to hear from you!